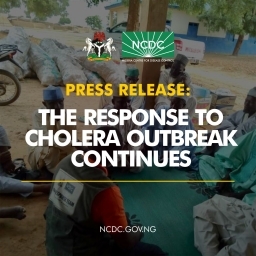 THE RESPONSE TO CHOLERA OUTBREAKS CONTINUE

Over the last few months, the Nigeria Centre for Disease Control (NCDC) has been supporting many States in the country to respond to outbreaks of cholera. The primary focus of the response has been to improve access to water and sanitation in these States. In addition, vaccination campaigns led by the National Primary Health Care Development Agency (NPHCDA) have been carried out in the most affected Local Government Areas (LGAs) in Adamawa and Yobe States.

Although cholera cases are still being reported from eight States including Adamawa, Bauchi, Kano, Katsina, Zamfara, Kogi, Plateau and Kaduna, there has been a general decline in the number of new cases. In the last four weeks, no cases have been reported from Anambra, Nasarawa and Yobe States.

In response to the outbreak, NCDC with support from its partners activated an Emergency Operations Centre (EOC) to coordinate the response. Rapid Response Teams were deployed to affected States, where they focused on improving coordination, case management, risk communications and surveillance activities. The Teams also supported the States in strengthening their laboratory capacity to guide interventions, especially oral cholera vaccination campaigns.

The water, sanitation and hygiene (WaSH) component of the response, led by the Federal Ministry of Water Resources (FMWR), has provided motorised solar-powered boreholes, sanitation units with hand washing facilities, as well as blocks of latrine compartment in affected States. Nigeria is also working with other Lake Chad basin countries to strengthen cross-border collaboration for cholera control.

The NCDC and partners have begun plans for a national cholera prevention campaign, prioritising States with the highest burden. This campaign will be driving prevention messages through the mass media, new media and community structures to reach households and communities. An oral cholera vaccination strategy is also being developed by our sister agency, NPHCDA. This will not only help to prevent the further spread of this outbreak, but will also help the prevention and preparedness for any future outbreaks.

According to NCDC Chief Executive Officer, Dr. Chikwe Ihekweazu, “Cholera cases are being treated at designated treatment centres in affected States. We are working with the State Ministries of Health, the World Health Organisation (WHO), UNICEF, Medecin Sans Frontiers (MSF) and other partners to support the response. However, the primary problem and solution lies not in health, but in improving water and sanitation.”

The Federal Government of Nigeria and partners will continue to work to reduce the impact of the current outbreak on affected communities and ensure that the outbreak is fully controlled. Planning has already started to prevent future outbreaks and ensure better preparedness.

The Nigeria Centre for Disease Control (NCDC) was established in the year 2011 in response to the challenges of public health emergencies and to enhance Nigeria’s preparedness and response to epidemics through prevention, detection, and control of communicable diseases. Its core mandate is to detect, investigate, prevent and control diseases of national and international public health importance.