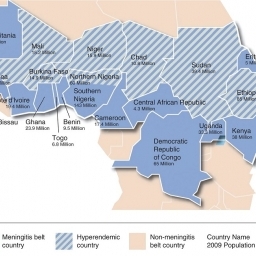 Public health agencies in Nigeria led by the Nigeria Centre for Disease Control (NCDC) and the National Primary Health Care Development Agency (NPHCDA) are supporting several States in North West Nigeria to respond to a widespread outbreak of Cerebrospinal meningitis (CSM). Cases of CSM were first reported in Zamfara State late in 2016. As at March 28 2017, the number of suspected cases reported for the 2016/2017 CSM season stands at 1,966 with the outbreak reaching epidemic proportions in five States- Zamfara, Sokoto, Kebbi, Katsina and Niger States.

Given the size of the outbreak and the number of States affected, the Nigeria Centre for Disease Control is leading a multi-agency CSM Outbreak Control Team to coordinate the response. This team includes representatives from the NPHCDA, World Health Organisation, UNICEF, US Centers for Disease Control, Médecins Sans Frontières and EHealth Africa.

The Outbreak Control Team is focusing on communicating prevention messages, strengthening surveillance, case detection, verification and management as well as communication and coordination across the affected States.

NPHCDA is leading a reactive vaccination in Zamfara State, while a similar response is currently being planned in Kebbi and Sokoto States. Vaccines that provide protection to Neisseria meningitidis serogroup C (NmC) are not commercially available and need to be acquired through a special process managed by WHO. NPHCDA is working closely with WHO to ensure that we get access to vaccines needed to respond to the outbreak and prevent further cases. In addition, UNICEF is currently supporting affected States to scale up social mobilisation focusing on grassroots engagement.

Meningitis can be treated if detected early. According to the Chief Executive Officer of the NCDC, Dr Chikwe Ihekweazu, “We understand meningitis peaks every year in the dry season in certain States and we must work better with these States to prevent the unnecessary loss of lives. We must work collectively to stop this outbreak and prevent outbreaks of this scale in the future”.

According to the Director of Surveillance at the NCDC, Mrs Olubunmi Ojo, “Immunisation is key to the prevention of meningitis. Between 2011 -2014, the MenAfriVac vaccination campaign against the predominantly circulating Neisseria meningitidis serogroup A in Nigeria then, led to a major reduction in cases recorded from that strain. We now see an outbreak caused predominantly by Neisseria meningitidis serogroup C (NmC). While reactive vaccination helps to curtail outbreaks, a vaccination campaign against NmC with a long-lasting conjugate vaccine is sorely needed in the region.

The NCDC and its partner agencies and institutions at the Federal Ministry of Health will continue to work closely with States and we believe that our concerted efforts will bring this outbreak under control, as we also work towards preventing outbreaks of this scale in the future.

History of Meningitis Outbreaks in Nigeria:

As one of the countries within the Meningitis Belt, Nigeria has recorded outbreaks in the past. Until recently these outbreaks were caused mostly by Neisseria meningitidis serogroup A (NmA). These outbreaks occur in the dry season, due to its low humidity and dusty conditions and usually ends with the onset of the rainy season. The introduction of the meningococcal A conjugate vaccine (MenAfriVac®), led to the decline of NmA cases and outbreaks caused by NmA epidemics have been virtually eliminated.

However, we now seem to be seeing a phenomenon called “serotype replacement” - an increase in the cases and outbreaks caused by other Nm serogroups such as W, X, and C. From 2013 to 2016, Nigeria has seen increasing cases of meningitis in adjacent Sokoto and Kebbi States caused by a new strain of N. meningitidis serogroup C (NmC).

Our brains and spinal cords are covered by membranes called meninges; they help to protect these delicate organs from infection and even direct physical injury. The infection of the meninges by microorganisms such as bacteria or viruses results in the condition known as meningitis. Viral and bacterial infections are the most common cause but bacterial meningitis is much more serious due to its rapid onset and its significant risk of death.

Neisseria meningitidis can be carried in the throat and sometimes, for reasons not fully understood, can overwhelm the body's defences allowing infection to spread through the bloodstream to the brain. It is believed that 10% to 20% of the population carries Neisseria meningitidis in their throats at any given time but the carriage rate may be higher in epidemic situations.

The most common symptoms of meningitis are stiff neck, high fever, sensitivity to light, confusion, headaches and vomiting, and anyone with the symptoms above is advised to urgently seek care at the nearest health facility. Meningitis should always be viewed as a medical emergency.